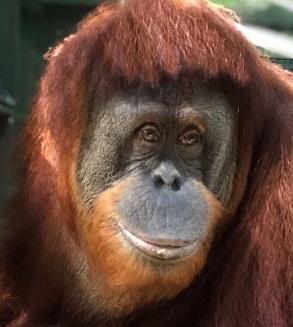 Sunshine was born in England where her mother was owned by singer Tom Jones’ manager.  Sunny and her mother (Daisy) were sent from England to the San Diego Zoo, but only for a short time.  Because Daisy and her infant Sunshine were hybrid mixes of Bornean/Sumatran orangutans, the San Diego Zoo did not want them and sent the monther and baby to a breeder/dealer in Florida.

Sunshine was taken from Daisy and sold to a California trainer for work in live stage shows at a Los Angeles tourist attraction. She worked in the shows for a number of years and then was sent back to Florida when she was too big to be handled for performances.

She lives in our only orangutan group and she spends most of her time with the two youngsters, Keagan and Archie, although she does like to be alone part of the day.  Sunshine occasionally shows her grumpy side, but we’ve also found her to be playful with the two younger orangutans as well as her caregivers!

Sunshine’s background was in the entertainment business in California for a few years, but she lived in Central Florida for a few years before arriving at the sanctuary.

In our 27 year history, we have successfully implemented birth control methods with no “birth control failures” until now.  To our surprise, one morning in February (2020) our caregivers discovered Sunshine had just given birth. Sunshine has been on birth control since her arrival in 2017 so we had no reason to believe she was pregnant. However, now she had a little orange bit of fluff clinging to her chest.

Our staff has named the infant Cahaya, which in Indonesian means “light”, “radiant” and “shine”. Which we thought would be an appropriate name for Sunshine’s offspring.

Sunshine is doing a very good job raising little Cahaya, and she watchfully allows the others in her group to interact with the baby.  The father, 15-year-old Archie, still acts like a juvenile himself and can barely contain his desire to touch the baby and kiss her. He is completely fascinated with little Cahaya and gentle in his approach. Sunshine lets Archie touch Cahaya, but not yet hold or carry her. Archie’s older sister Keagan is a wonderful aunt to the infant, and Sunny allows Keagan more privileges and interactions than she does Archie.

Previously Sunshine has given birth to three infants at a breeding compound but they were each taken from her, so she was never able to raise them. While this birth was not in our plan or mission… when we look at this precious infant, it’s hard not to feel happiness and joy for Sunshine that she will finally be able to raise her own infant.  Recently, Sunshine’s first daughter Hanna arrived at the sanctuary when the tourist attraction where she was located closed. Sunshine and Hanna have the opportunity to see each other on a daily basis. Hanna definitely looks a lot like her mother. 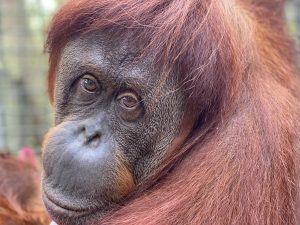 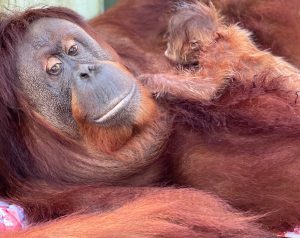 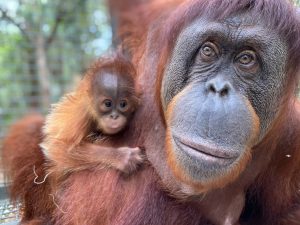