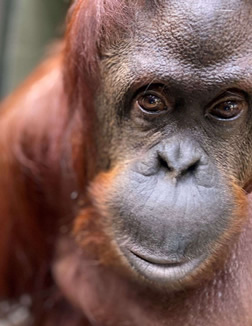 Sandra was born in 1986 at the Rostock Zoologischer Garten in Germany. She and a young male orangutan named Max were both sent from Germany to Buenos Aires in 1994. Sandra lived with Max and another orangutan in their early years there, also spending a short time at the Cordoba Zoo before returning to the Buenos Aires Zoo in 2008.

Sandra gave birth to a male infant named Gembira in Argentina, but she was not maternally interested in caring for him, so the caregivers at the zoo hand-raised Gembira for 18 months.  When he was re-introduced to Sandra, she did not treat him as her infant son… but rather, as a playmate. They were together until juvenile Gembira was sent to a zoo in China.   After Gembira left, Sandra lived alone for many years in Buenos Aires until an animal welfare group (AFADA), concerned about her situation, took Sandra’s case to court to claim “personhood” rights for her.

Buenos Aires Judge Elena Liberatori’s landmark ruling in 2015 declared that Sandra is legally not an animal, but a non-human person, thus entitled to some legal rights and better living conditions.  “With that ruling I wanted to tell society something new, that animals are sentient beings and that the first right they have is our obligation to respect them,” she told The Associated Press.

Judge Liberatori ruled that Sandra must be moved to a sanctuary and not be held in a zoo.

Since the Center for Great Apes is the only accredited sanctuary for orangutans in the Americas, we were asked to accept Sandra here.  International and federal permits took years, but in September 2019, Sandra left Argentina for her new home in the U.S.   However, she was first required to be quarantined for 30 days at a CDC-approved quarantine facility, so the Sedgewick County Zoo in Kansas offered to help us with that.   After her quarantine period was over, Sandra arrived at the Center for Great Apes in November 2019.

Sandra adjusted quite well, and over the next few months, she was slowly introduced to our male orangutan Jethro. In her first year and a half at CGA, Sandra and Jethro have developed a true friendship.  While orangutans are experts at “social distancing”, Sandra and Jethro choose to spend time alone or together. But, Sandra often follows Jethro and is never very far from him.

What does “personhood” mean for a great ape?

The “personhood” case for Sandra was initiated and pursued by an animal welfare group in Argentina called AFADA (the Spanish acronym for the Association of Officials and Lawyers for Animal Rights). In the court decision, Sandra was granted legal personhood with the right to be respected as a sentient being. The court ruled that she was not allowed to remain on exhibit in the zoo.

Does Sandra still have legal personhood in the United States?

Since it was an Argentine court ruling, when Sandra left Argentina, she lost her status of legal personhood. However, we consider that all great apes have the right to be respected as sentient beings.

Why did Sandra leave Buenos Aires?

The Buenos Aires Zoo closed in 2016. It is being dismantled and converted into Ecoparque, a facility for Argentine native wildlife, and is set to open in 2023. Additionally, the court ordered Sandra to be moved to a sanctuary, and there are no orangutan sanctuaries in Argentina.

How was the Center for Great Apes chosen for Sandra?

The Center for Great Apes is the only accredited sanctuary for orangutans in the Americas. Judge Elena Liberatori who granted Sandra legal personhood status in Argentina reviewed opinions from biologists, veterinarians, and orangutan experts and asked the sanctuary to accept Sandra.

What kind of orangutan is Sandra?

Sandra was born in captivity and is a hybrid mix of Bornean and Sumatran orangutans.

What are the threats to orangutans?

Today, wild orangutans are being decimated in their native ranges in Borneo and Sumatra due to poaching, mining, and farming of palm oil causing habitat loss. Additionally around the world, orangutans are still used as entertainment objects at venues where they dress up, have boxing matches, or pose for paid photos with tourists. 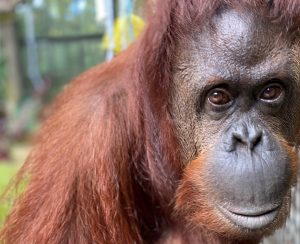 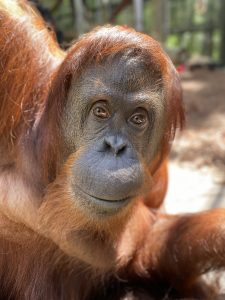 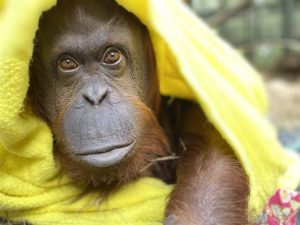 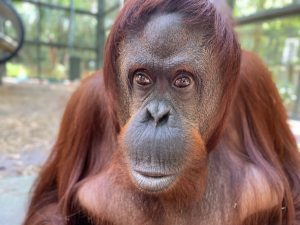 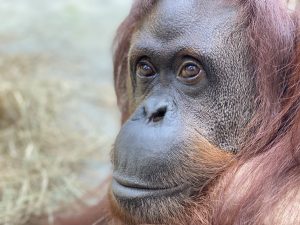 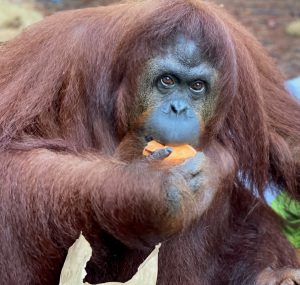