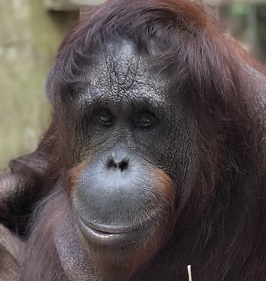 Popi was born at the Yerkes Primate Research Center in Atlanta. She was sold to a famous circus trainer (Bobby Berosini) who worked her in Hollywood movies, commercials, and TV shows. When she was only seven or eight years old, Popi appeared as the girlfriend of orangutan “Clyde” in the movie Any Which Way You Can, starring Clint Eastwood.  She also performed in Going Ape with Tony Danza and Danny DeVito.

Berosini also worked Popi and several other younger orangutans in a Las Vegas nightclub show for over two decades. While working at the Stardust Hotel in Las Vegas, a dancer in the show filmed the trainer backstage hitting his orangutans on the head and body minutes before each performance for seven days in a row. Public outcry ensued, and Popi was at the center of what became the first animal welfare lawsuit to raise critical questions about the treatment of great apes in entertainment.

At the end of the legal case against the trainer, he left the country but sent Popi and his other orangutans to a California entertainment compound. Popi was at this Hollywood training compound for several years until she was moved in 2008 to a cognitive research facility in Iowa, the Great Ape Trust.  When the Great Ape Trust sent away all their orangutans in 2011, the Center for Great Apes sanctuary accepted Popi, along with female orangutan Allie, and they both arrived at our sanctuary in January of 2012.

Popi loves to play in water and will dip a cup into a bucket and pour it into another cup, over and over. She likes cleaning and scrubbing with brushes and soapy water, and she does NOT like to be dirty. Popi seems to enjoy painting, but her very favorite thing is to be groomed and have her hair brushed by the caregivers.

Popi now has peaceful days doing what she chooses to do: strolling through the woods in the aerial trailways; napping in her afternoon nest; snacking on fruit; playing with enrichment puzzles and bubble baths; and having visits with her orangutan friends. 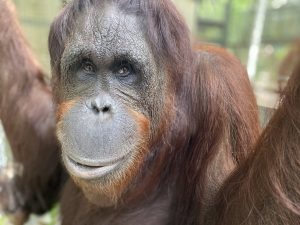 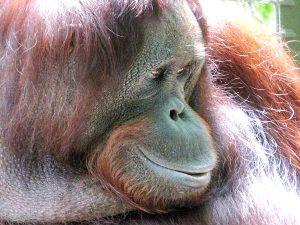 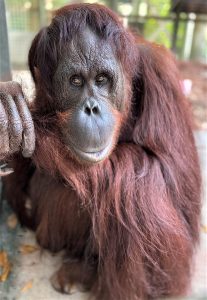 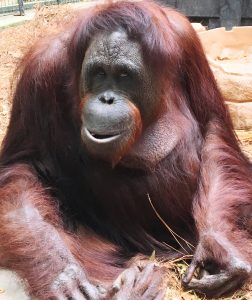