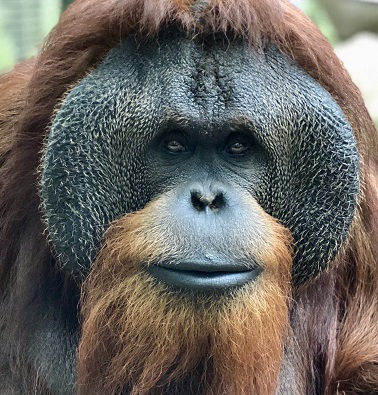 Pongo is a very handsome adult male orangutan and is accustomed to a great deal of attention.  However, he is shy with new people and will often hide his face and then peek when he thinks no one sees him.

As an infant, Pongo would have been sold into entertainment, but he came down with a serious illness which prevented the sale.  Patti Ragan, a volunteer at the tourist attraction who helped raise Pongo, was given the opportunity to find him a suitable home. When she learned that accredited zoos did not have room for a hand-raised hybrid Bornean/Sumatran orangutan, she set out to find a sanctuary home for Pongo. After a nonprofit was established and beautiful property located, Pongo was moved to his permanent sanctuary home in Wauchula where he has lived with three other orangutans…Christopher, Mari, and Pebbles.

Currently Pongo lives full time with Mari. They spend their days traveling through the forest woods in the elevated aerial trailways or hanging around in their four-story tall habitat with large cypress-tree climbing structures. Mari will often groom Pongo with her feet since she has no arms.

As a fully-developed adult male, Pongo has become more subdued in his play behavior. He spends much more time alone watching the goings-on at the sanctuary from inside a large culvert, or from behind a shady tree in the overhead trailways. Pongo can be seen daily, sitting in his culvert in front of his fan, hands raised high in the air letting the wind blow through his long, beautiful hair. But if he spots someone watching him, he lowers his hands and turns away in shyness. 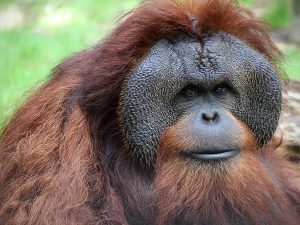 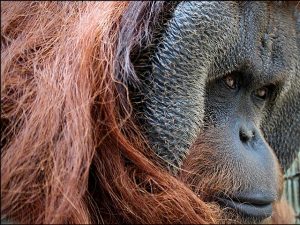 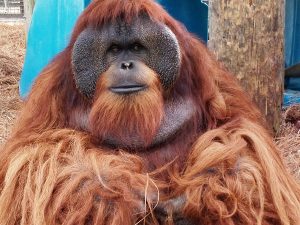