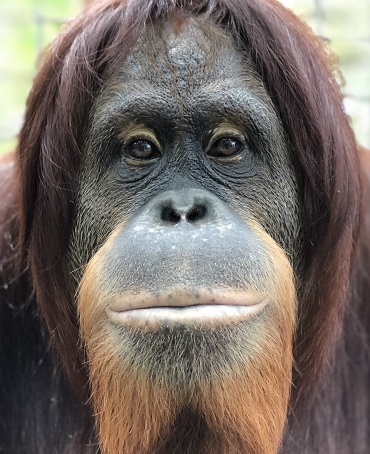 Pebbles arrived at the Center for Great Apes in December 2004 from a California trainer’s compound where she performed as an infant in the entertainment business. At only age 4, she still had a few years of working ability ahead of her, but her owner thankfully decided to stop working great apes in shows and commercials.

Pebbles is known for her audacity and fearlessness. She is a beautiful young orangutan who is very confident around the other apes, no matter how large they are. The first time she met adult male, Radcliffe, (with protective cage wire between them) she was just 45 pounds and he was over 260 pounds. She stuck her tiny hand right through the openings in the wire and into Radcliffe’s huge open mouth. Then she stuck her finger up his nose! The observing caregivers were surprised, and so was Radcliffe. He started “baby-squeaking” to her, and they became immediate friends.

Months later, when Pebbles was introduced into the same habitat with adult male Pongo, she had never before been one-on-one with such a large orangutan. However, from the moment she entered his enclosure, she was calm and eager to see him. She walked right up to Pongo, faced him, grabbed his beard, and tugged. Pongo looked shocked but quickly reacted with play gestures, and they lived harmoniously together in a group for several years.

At the sanctuary, Pebbles has lived with many orangutans since her arrival in 2004. She started off with the other youngsters BamBam and Jam and then moved into Pongo’s group with Christopher and Mari.  She also had playdates with Louie and Tango. However today, Pebbles lives with Christopher who adores her.  As an adult now, she is still very playful and loves to wear things on her head and wrestle in tubs with Chris. 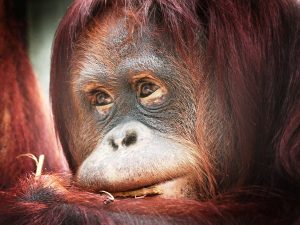 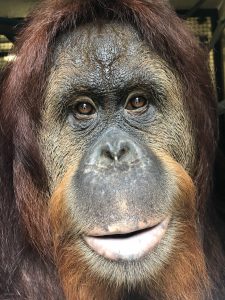 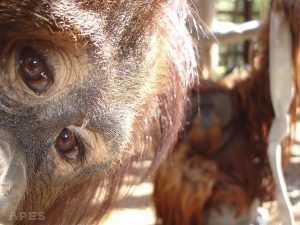 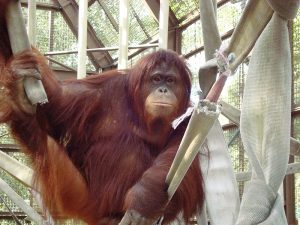