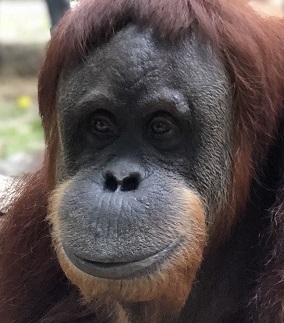 Mari, a pure Sumatran orangutan, was 20 years old in 2001 when she arrived at the Center for Great Apes from a language and cognition study at Georgia State University. She is a very special orangutan in that she has no arms. She lost both her arms (while still an infant at 12 weeks old) when her mother, in a very agitated state, damaged her limbs beyond repair.

In spite of the accident, Mari is a very capable orangutan. She uses her chin to hoist herself up, uses her feet as we would our hands, and she walks upright (or rolls when she wants to get somewhere quickly). Initially, we were concerned that she might have difficulty maneuvering in a new environment, but she quickly proved us wrong. Mari moves with such ease and grace that sometimes we forget that she is missing her arms.

Great apes are extremely intelligent animals and need a stimulating environment when housed in captivity. At the Language Research Center, Mari worked with lexigrams, mazes, puzzles, and memory tasks. She could even solve computer mazes by manipulating a joystick with her feet.

Today, Mari still loves to work with puzzles and to sort things into containers. She likes to paint, and loves a big tub of water. She daily climbs the ladder to the top of her 40-foot-tall enclosure using her chin and her feet, and she likes to spend part of the day walking upright through the woods in the aerial trailways. When she’s ready for a rest, she climbs into her hammock for a nap.

Mari lives with Pongo and has been his companion for the past 20 years. 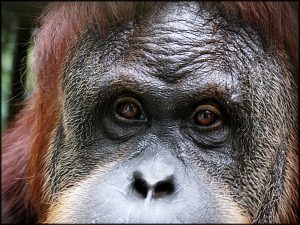 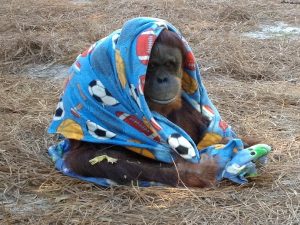 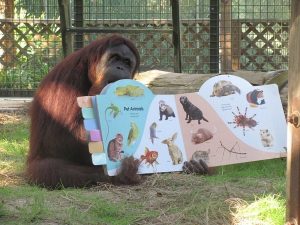 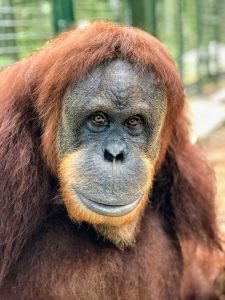 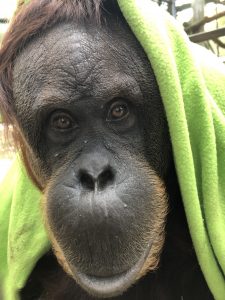