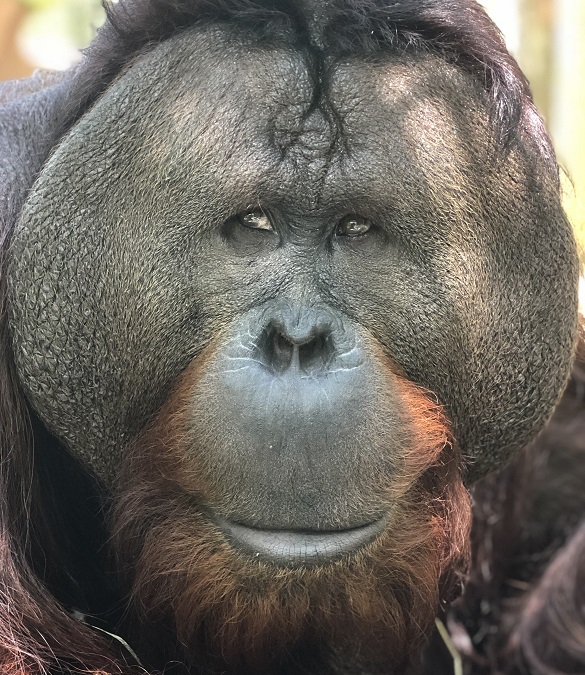 Louie was born at a Miami breeder’s compound and was first named “Bubba”. For the first year of his life, he lived at the Parrot Jungle bird park in Miami where a few other orangutans started out. When Bubba was a year old, he was sent to California to work in entertainment and there, he was renamed “Louie”.

Louie appeared in the Dr. Doolittle movie with Eddie Murphy, but most of his young years were spent performing in live stage shows at a Los Angeles tourist attraction. At age 9, Louie had grown too large and strong for the trainers to handle in the shows, so he was retired to the Center for Great Apes’ sanctuary in Florida in 2005.

Still considered a youngster when he arrived, Louie was able to live with BamBam, another young male who also worked in entertainment. Best friends and constant companions, Louie and BamBam loved to tumble, wrestle, tickle, and chase each other through the woods in the aerial chute system for several years.

Since orangutan males are territorial as adults and do not usually live together harmoniously, Louie and BamBam eventually separated themselves as they matured and developed their adult characteristics including facial flanges (cheek pads), beard, and long hair.

Shortly after her arrival in 2012, the female Allie was introduced to Louie with wonderful results. Louie had never lived with any female orangutans, so the Center caregivers were not sure how he would react to Allie. And to complicate matters, Allie has physical disabilities and cannot use her legs at all. She climbs and moves around using only her arms. However, when they were first introduced, it was mutual love. Louie is always very gentle with Allie and seems to be aware of her disabilities, gently interacting with her and often protecting her. Louie and Allie have lived together for nearly a decade now and Louie spends most of his day near her. 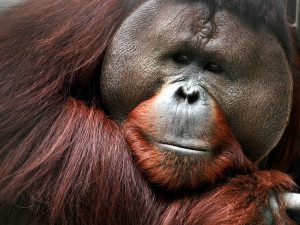 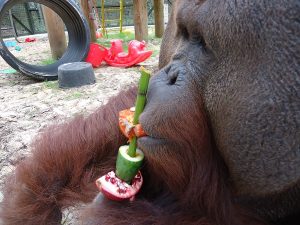