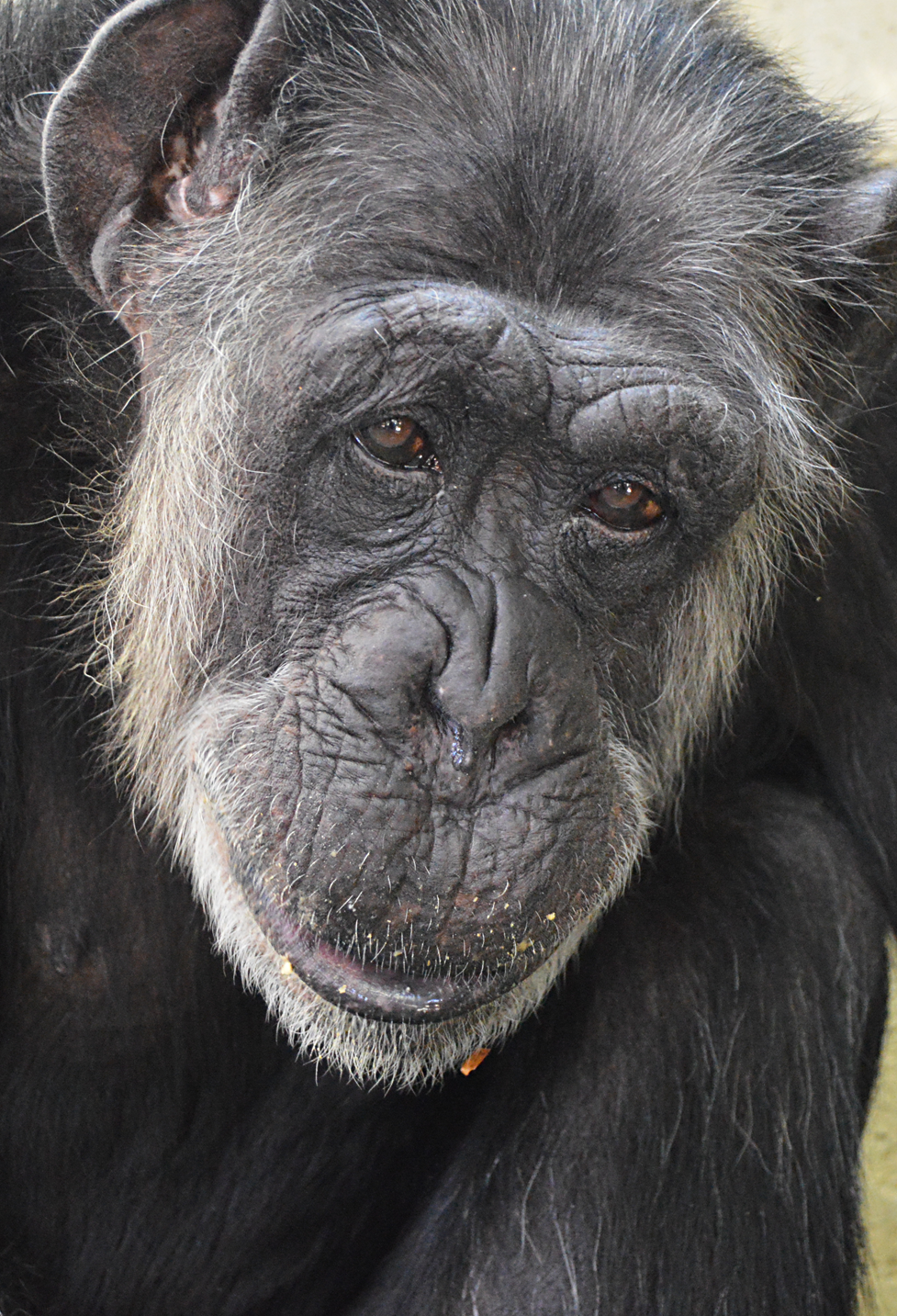 Toddy was one of our oldest and most beloved chimpanzee residents at the Center. She passed away in June of 2017 from congestive heart failure.
We are truly heartbroken as 45-year-old Toddy had lived with us at the sanctuary for 19 years, and was one of our oldest apes here.
Toddy started her life in Africa in the early 1970’s where she was captured from her mother to be sold on a street corner in Kinshasa, Zaire.  When her mother was killed, infant Toddy was hit by some of the bullet fragments which lodged in her brain, and even though some of them were surgically removed when she was two years old, other fragments remained throughout her life.
When the people who bought her in Zaire came back to the U.S., they decided they couldn’t keep her and resold her to a family who cared for Toddy for seven years raising her in their home along with their human children.  Toddy was very loved there, but as she grew and became stronger, they finally realized that a growing chimpanzee could not live safely in a human household.  Toddy then was moved to a number of places including a primate tourist attraction in Homestead and a horse farm in Ocala.
At about 9 or 10 years old, Toddy ended up in Miami at a compound where she lived with other chimpanzees giving birth to a number of babies while there.  We know that her first two infants were sold to a tourist attraction in Michigan, and then another female infant in 1987 (Chelsea) was sold to a California trainer for live stage shows.  In 1991, Toddy gave birth to twin males, but they both died within a day.  In 1993, Toddy gave birth for the final time to a female (Kenya) who was pulled from Toddy the day she was born and eventually lived at a Miami tourist attraction until she was moved to our sanctuary in Wauchula in 1998.  A few months after Kenya arrived in Wauchula, Toddy was also moved from the breeder’s compound to our sanctuary and was finally reunited with her daughter.  Toddy gave birth to at least 6 infants, but Kenya is the only offspring she ever knew.
Her first decade at the sanctuary was spent living with our original youngsters Grub, Kenya, and Noelle.  Little Noelle was only 3 years old when Toddy arrived, and for the first year Noelle slept with Toddy…finally giving her a chance to be an “auntie” and raise infant Noelle.  Over the years, Brooks and Mowgli joined that group, and Toddy had good relationships with all the chimpanzees.  As Toddy aged though, she began to have difficultly climbing the tall structures in her four-story high habitat, and the play-time of youngsters Mowgli and Noelle became a little too active for Toddy.
While Toddy had many chimpanzee relationships in her life,  the most meaningful to me was her late-life romance with Clyde.  She was the only chimpanzee friend Clyde had in his 49+ years after he was pulled from his mother in Africa.  When Clyde first arrived at the Center after living 45 years in an Ohio garage, he was frightened of most of the chimpanzees he saw here.  But when he was introduced to Toddy, Clyde “fell” for her in a big way!  For nearly five years, Clyde and Toddy were completely devoted to each other – playing slow games of “chase”, grooming each other, sharing food, and even resting together after playing “tickle”.  It was a wonderful time for both Clyde and Toddy, and these two dear, elderly chimps captured the hearts of all our staff, volunteers, and friends.
When Clyde died at nearly 50 years old, Toddy was with him on his last day and kissed him on his face, bringing tears to all of us.
After Clyde passed away, Toddy continued her relationships with her first chimpanzee family here spending most weekends with Noelle or Mowgli.  Toddy also became a companion to Knuckles, our young male chimpanzee with cerebral palsy.  Toddy was wonderfully gentle with Knuckles… and with all her experience with chimpanzees, she knew how to handle his awkward efforts to be friends with her.  Toddy made a huge difference in Knuckles’ life giving him the opportunity to have chimpanzee companionship that was safe for him with his physical disabilities.  Toddy’s friendship with Knuckles was a blessing for him… and my heart breaks as her passing is a huge loss for Knuckles.
Last year, we discovered another amazing relationship for Toddy.  Her daughter Chelsea (now 30) who was sent to California as an infant to work in entertainment was later sent to the Noichi Zoo in Japan.  Chelsea had an infant in Japan (Milky) who also has cerebral palsy like Knuckles.  Milky’s caregivers and physical therapists in Japan traveled to see us in Wauchula this year in order to learn more about Knuckles and his progress over the years so that the information might help Milky.  They also wanted to meet Milky’s grandmother, Toddy. (Toddy and Milky look very much like each other, and we featured them in our most recent newsletter.)
As Toddy’s health declined in the month before she passed, we stayed close to her keeping watch around the clock.  Toddy knew she was loved and being comforted.  She wanted us to brush her back and once in a while would ask for a game of “chase” (but only a few feet or so).  At the worst time for her when she couldn’t even sit up, she still bobbed her head in a play gesture “talking” in her soft hoots.
While Toddy had a number of homes in her past, the longest and best part of her life was here at the sanctuary for 19 years.
Of course, Toddy was buried with her favorite toy in her hand which she carried with her constantly… her dirty, torn-up, purple old Wubba.
I know that any of you who have ever met Toddy also grieve with us, but we are lucky to have had this remarkable chimpanzee lady in our lives. 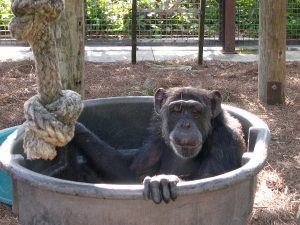 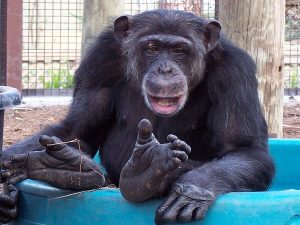 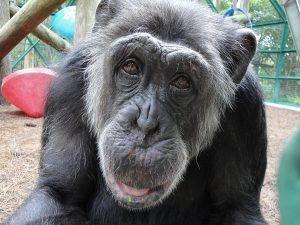 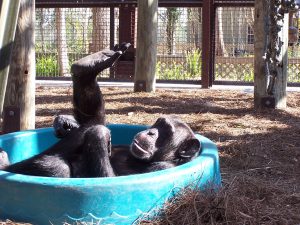 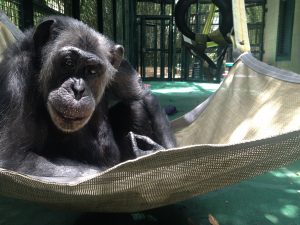 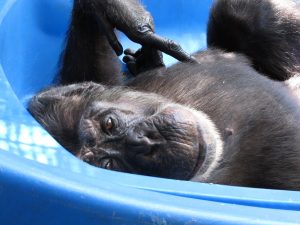