Once, the youngest ape at the Center, In March 2005, Stryker arrived at the sanctuary riding on the belly of his mother Jessie when he was only 6 weeks old. He was an unexpected addition because the trainer who sent Jessie to us did not know she was pregnant until the baby was born! Stryker has had the benefit of being raised in a group with his mother Jessie, his grandmother Oopsie, his aunt Boma, his sister Kodua, and the adult males Sam, Bubbles, and Ripley.

As he’s grown through adolescence and is now an adult male, Stryker has had experience forming friendships with other groups of chimpanzees (Murray, Jonah)who are closer in age and who can interact and play with him in a more lively and energetic manner than his aging natal group.

Stryker is currently in a group with Ellie, Bella, and Jacob. He is a key member of Jacob’s group and is helping to form a new family group with the younger males (Kenzy and Bentley). He has been mentored by other alpha male chimpanzees at the sanctuary
(Sam, Ripley, Bubbles, Murray, and Jacob)  and is now working on becoming an alpha
male himself. 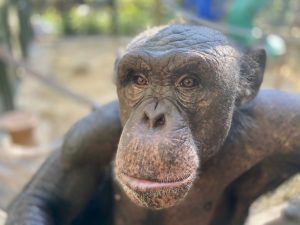 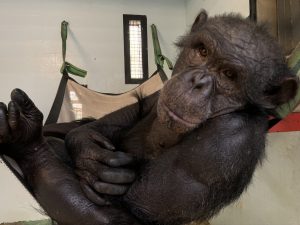 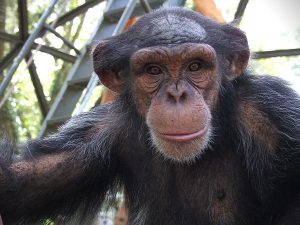