A difficult loss for the Center in 2011 was that of 43-year-old Sam, who passed away peacefully in his sleep from heart failure.

Over 40 years earlier, Sam had been in the entertainment business, until he grew too large and dangerous to work around people. He then spent the next 30 years at a California compound, but never bred with any of the females. One possible reason for his breeding inactivity was that a trained entertainment dog had bitten off one of Sam’s testicles when they were working together on a film set.

Sam lived much of his life (both in California and at our sanctuary in Florida) in the company of Bubbles, who was 14 years younger than Sam. The two adult males were best friends and spent a lot of time together grooming and playing—an anomaly for a chimp of Sam’s age.

When he chose be alone in his habitat, Sam often sat at the top of the 34-foot-high cupola, staring out at the surrounding countryside and orange groves. On balmy nights, Sam liked to make his nest of blankets and sleep outside in the lofty tower.

Because both Sam and Bubbles had always been gentle with younger chimpanzees, they were used at the California entertainment compound to socialize the former working chimps back into chimpanzee groupings. Thus it was no surprise that when Sam lived with Oopsie and her family at the sanctuary, infants Kodua and Stryker loved him! They would jump all over him, ride on his back, tease him, and generally do anything to get his attention. Sam patiently endured their pestering and always ended up tickling or grooming both Stryker and Kodua. One of the most endearing photographs ever taken at the Center is that of Sam lovingly tickling little Kodua, much to her extreme glee.

Sam’s last day alive was spent in the company of his group, being groomed by Oopsie and playing with youngster Stryker. When he was found in his nest early the next morning, Oopsie and her family were allowed to come into Sam’s room to say goodbye. It was a very moving moment when 40-year-old Oopsie sat silently next to Sam for about 30 minutes, occasionally patting his body and arranging his blankets. Our staff members miss Sam very much, and so does his chimpanzee family. 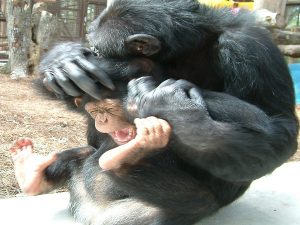 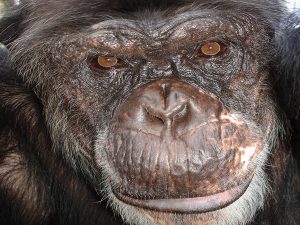 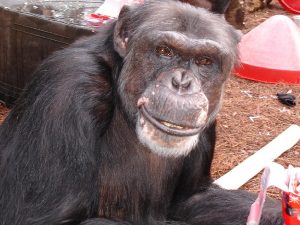