Roger was born at a roadside zoo in north Florida, where he was taken from his mother as a tiny infant and sold as an exotic pet to a family in Connecticut.

When he was three, his family sold Roger to a circus trainer. The trainer worked Roger as a cellist Ringling Brothers’ chimpanzee band for more than a decade. After he was retired from the circus, Roger spent a few years living in the trainer’s garage before being sent to a small roadside attraction in Florida. There, he shared a cage with an adult male orangutan. They were separated only by chain link fence. The staff at the tourist attraction said that Roger was very frightened of the orangutan (Radcliffe), who was twice Roger’s size. (Note: While infant chimpanzees and orangutans are sometimes worked together in entertainment, this match-up is unnatural, since orangutans are from Southeast Asia and chimpanzees are from Africa.)

When the tourist attraction closed in 2002, the Center was asked to take in Roger and Radcliffe. At first, Roger was nervous in his new home—afraid of even the blankets and toys offered to him. After a concentrated effort by the sanctuary staff to make Roger feel secure and safe, he was soon making nests with his blankets each night. Eventually he played with the many toys and enrichment items provided to him daily.

For a time, Roger was introduced to another former circus chimpanzee, Chipper. They lived together and actively played and groomed for about a year, but after a few altercations started by Chipper, Roger became afraid of Chipper and refused to go outside with him. At that point, we introduced Roger to Daisy, also a former circus chimpanzee who was about Roger’s age. Since Daisy is very easygoing, Roger was comfortable with her. They became cherished companions—even sleeping in the same nest at night. Roger and Daisy later joined Angel, Natsu, and Mickey to form a larger group. Mickey grew to trust Roger and spent much social time bonding with him. One day in February 2012, Roger was running happily with his companions when he died of a sudden heart attack. He was only 32.

Roger was a gentle soul—truly one of the sweetest chimpanzees at the sanctuary. He was kind to the other chimpanzees as well as to the staff. We all miss Roger very much and feel blessed to have had him with us for ten years. 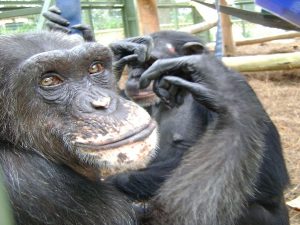 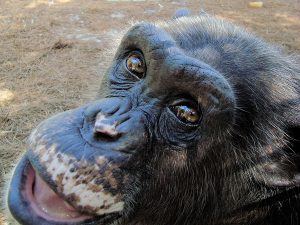