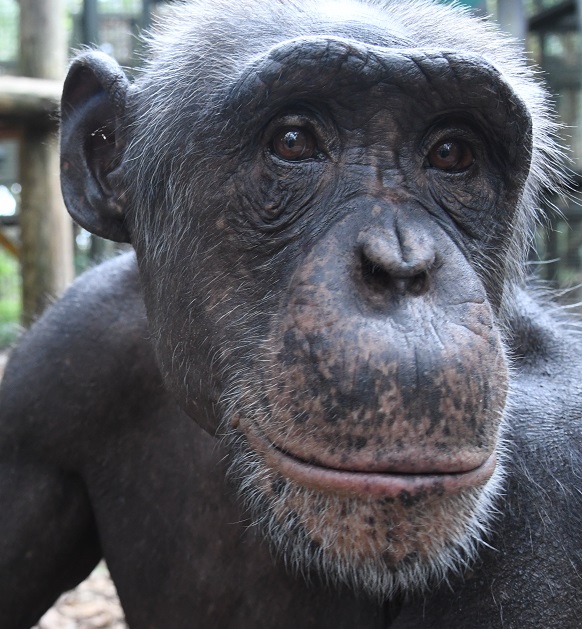 Noelle was born at a breeding facility in Miami. Her birth mother was hand-reared as a pet and was inexperienced in caring for infants, so Noelle was taken from her mother and raised by a human family in Ft. Myers until she was six months old. When she was returned to Miami, she lived at a tourist attraction bird park with Grub and her older sister Kenya.  At age 3, Noelle was moved to the Center’s new sanctuary property in Wauchula and has lived with Kenya all her life.

Noelle is very bright and quickly solves enrichment puzzles. She surprised the staff (when she was only 3 years old) by observing sign-language “words” shown to Grub and Kenya, and later forming the signs at the appropriate times.

Noelle “talks” to the staff frequently during the day in her own version of sign language. She’ll ask for her favorite treats or tell us that a tasty ginger-flower is in bloom near her enclosure. She watches the mulberry tree nearby and signs “berry, berry” when the mulberries turn black and are ripe. She asks volunteers for a game of “chase” and comments to us when she sees or hears a bird nearby. Noelle also knows the sign for “hurt” and will show us her cuts and scratches as well as sign “hurt, hurt, hurt” when she sees a visitor on crutches, in a sling, or in a wheelchair. She knows about 30-40 signs and will sometimes practice them (and talk to herself) in front of a mirror.

Noelle’s chimpanzee group consists of Brooks, Mowgli, Natsu, Kenya and Chipper. Size-wise, she is a tiny female but has a huge personality. 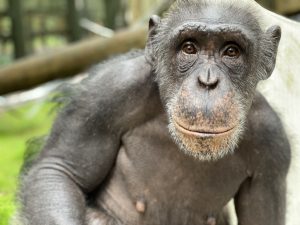 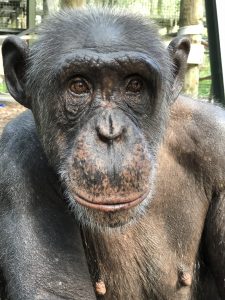 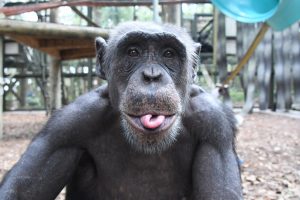 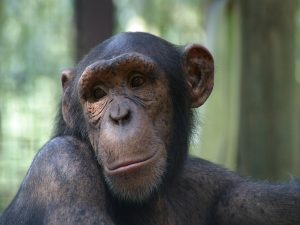