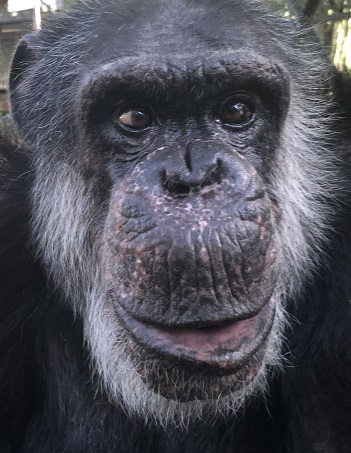 Joe was wild-caught and imported to the U.S. from Africa in the 1970’s when it was still legal. As an infant, Joe was a performer at the St. Louis Zoo in their old chimp shows.  When he grew too big to perform, Joe and an older female named Lily were sent by the zoo to Arbuckle Wilderness – a drive-through safari park in Oklahoma. At the safari park, Joe and Lily produced many offspring, but their infants were all pulled and sold as exotic pets or as entertainers.  Amazingly, we have four of their offspring already living here who came from entertainment and from the pet trade – Murray, twins Jonah & Jacob, and Ellie.

When Arbuckle Wilderness was closed, Joe and Lily were sent for a short time to a California trainer… and then moved again back to Oklahoma to a small private zoo, CW Exotics, in Winwood.   Lily died there, and Joe lived alone for many years.  The owner of CW Exotics, “Joe Exotic” of Tiger King fame, asked us to take Joe and another elder male chimpanzee, Bo, when his park was sold and closed in 2019.

Joe and Bo who lived separately in Oklahoma were moved to the Center in June 2018 and were introduced to each other as soon as they arrived in our quarantine facility.  It was a heartwarming moment as these dear males who had lived alone for years embraced and groomed each other for hours.   They still live together and were introduced to females Angel and Maggie. Joe loves playing with the girls. He is very smooth and sweet with the females. He is also an excellent nest builder… especially when a female chimp is watching.

Joe doesn’t need to be the center of attention which compliments Bo well.  Joe’s favorite foods are celery, frozen bananas, dried fruit, and juice.  His favorite type of enrichment is a frozen boomer ball which he’ll carry around and work on it for the entire day!

These two unrelated chimpanzees who lived in different states for many years before moving to Oklahoma,  each sired offspring who were used in the ape trade business.   One of Joe’s daughters and Bo’s son are the parents of our little Bentley!  So they are both Bentley’s grandfathers who coincidentally ended up in Oklahoma from different owners. Joe and Bo now peacefully live together at CGA, and we refer to them as “the grandpas”.

Joe's exact birthdate is unknown since he was wild-caught in Africa in 1972. 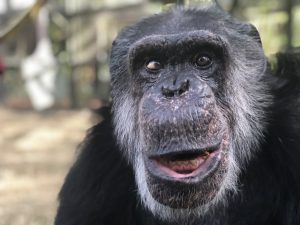 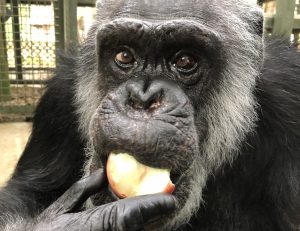 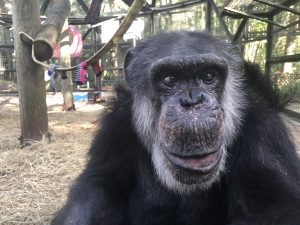