Grub, the very first chimpanzee at the Center for Great Apes, was a remarkable being who had many fans and friends, both chimpanzee and human. We all mourned his loss when, at the age of 20, he sadly passed away after a brief illness.

Only 12 weeks after being born at a Los Angeles animal trainer’s compound, Grub was pulled from his chimpanzee mother, Oopsie, and sold to a Miami tourist attraction. That’s where Patti Ragan discovered Grub and orangutan Pongo. These two great apes gave her the impetus—namely, concern for the future of great apes coming out of the entertainment and backyard pet industries—to start a sanctuary! Indeed, more than 30 chimpanzees have pioneer Grub to thank for paving their way to the Center for Great Apes.

Though the Center was launched in 1993 with Grub and Pongo as its first residents, they didn’t move to the Wauchula property, their permanent home, until 1998. It is here that Grub grew up as part of a group that consisted of Kenya, Noelle, and Toddy. At various times, Grub also lived and played with other chimpanzees at the sanctuary—Brooks, Knuckles, Angel, Kodua, Mowgli, and his own birth mother Oopsie after she was retired from a California trainer in 2005.

Grub’s most amazing relationship was with young handicapped chimp Knuckles, who arrived at the Center from Hollywood when he was two years old. Knuckles had been diagnosed with cerebral palsy and had difficulty walking. Grub, Kenya, and Noelle all accepted Knuckles into their group for limited playtimes, but Grub seemed to be the one most fully aware of Knuckles’ limitations and was the one who was most gentle with this special boy. Even though he weighed a hefty 145 pounds and was strong enough to throw large barrels into the air—a typical conclusion to his adult male “displays”—Grub acted the opposite of rough and tough around little Knuckles.

He also played the role of Knuckles’ guardian, when need be. For example, whenever Mowgli joined the group and playfully poked Knuckles or pulled Knuckles’ hair through the wire mesh, Grub kept a close eye on them. If he saw Mowgli getting too rambunctious with Knuckles, Grub would either gently put his hand on Mowgli’s arm to stop him or give him a stern eye as a warning not to touch Knuckles.

While Grub was a celebrated painter—he and his artwork were featured on NBC’s Today Show in 1996—his most unusual pursuit was his penchant for mask-making. He learned to make masks when, at the age of three, he watched a sanctuary volunteer tear eye holes in a paper plate. When she tried to get Grub to don the mask, he resisted—instead insisting that she put it on. Based on that single mask-making session with the volunteer, Grub began to experiment on his own with paper bags, cereal boxes, wrapping paper. Anything! When he couldn’t find paper in his habitat, he would pick up fallen leaves and make tiny masks from those. He delighted in presenting these “Grub-masks” to visitors at the Center and watching them wear the masks. In fact, he made a beautiful mask from a red cereal box for Jane Goodall when she visited him in 2005. We will all miss those special gifts from Grubby.

The Center staff will always feel the loss of this very special chimpanzee—our precious Grub. But all the wonderful qualities and intelligence Grub expressed—along with the joy and sweetness he brought to others—remain to this day. Thankfully, our fond memories did not pass away with him. 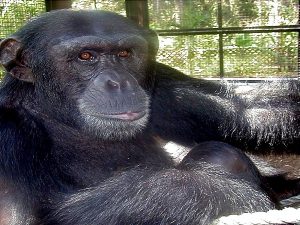 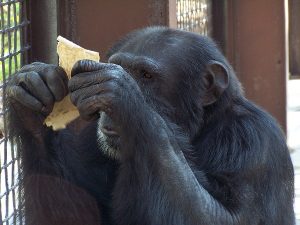