Clyde passed away peacefully in his nest after two years of struggling with both liver and kidney disease. While we greatly miss this wonderful, sweet chimpanzee, it is comforting to know that Clyde enjoyed to the fullest his final few years, surrounded by the loving and respectful care of sanctuary staff and volunteers.

As an infant, Clyde was captured in Africa and sold as a private pet. It is believed he was over a year old at the time, but since his birth date is unknown, we can only estimate his age. Clyde’s owners loved Clyde but did not have the space to provide him with more than a small cage in their garage, where he lived alone for 45 years.

When Clyde first arrived at the Center for Great Apes, he was emaciated and weak, unable to even climb up to a shelf in his new habitat. In his first few months at the sanctuary, Clyde spent most of his days sleeping in the sunshine, as if making up for the decades he had been deprived of that joy. Day by day, he gained strength and weight with proper nutrition and space to exercise. At the same time, with the encouragement and patience of his caretakers, Clyde overcame his fear of the aerial trailway. Finally, one day he stepped out into the chutes and began to explore sanctuary. It was one of his many “first” moments of discovery and progress in his new home.

Because he had never seen another chimpanzee after his mother was killed in Africa, Clyde was petrified of his fellow great apes when he arrived at the Center. So, through the safety of the “howdy” mesh, we carefully and gently introduced him, one by one, to several other chimps. Each time, Clyde backed away out of either fear or lack of interest. Then came his meeting with Toddy, who, like Clyde, had been wild-caught in infancy and who was by then an elder in her 40s. When she bobbed her head as a playful gesture to calm him, Clyde, not understanding this chimpanzee etiquette, screamed at Toddy, which scared her. Thankfully, we decided to try one more time. The next day, when we opened their doors, to our amazement Clyde ran straight to Toddy and hugged her! They remained constant companions from that day on—each very devoted to one another.

During the weeks that Clyde’s health was declining, Toddy sat quietly by his side while he rested, sometimes just holding on to his foot. On the day that he passed away, Toddy came into Clyde’s room and gently placed her face right on his face, remaining still for a long time. She was clearly saying goodbye. Later that day we brought Clyde’s body to our Memorial Garden and buried him near Denyse.

Truly, it is one of the saddest jobs we must do here. Through our tears, we carry out this final caretaking deed with dignity and respect. While we all feel heartbroken over losing Clyde, we feel even more grateful to know that he spent his last years with choices, dignity, great happiness, plentiful sunshine, renewed strength, and the loving companionship of his dear friend Toddy. 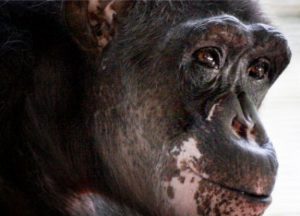 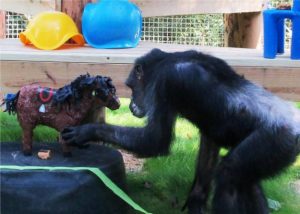 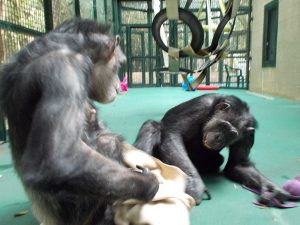