The passing of our beloved Casey was sudden and unexpected. Early one morning, after a night of respiratory distress, she reached out to hold her caregiver’s hand, took a deep breath, and then stopped breathing. The post-mortem exam showed that Casey had a fatal heart attack as well as cancer in her lungs.

We are grateful that at the end she felt the loving touch and affection of her caregiver as well as the nearness of her closest chimp friends, Murray and Katie.

Born at a breeder compound in Missouri in 1988, Casey was taken away from her birth mother when only a few days old and sold as a private pet when she was a mere 10 months old. Not wanting Casey to grow up alone, her owners later brought home an infant chimpanzee (Murray) so that Casey could grow up with a companion. Her owners loved Casey and Murray, but were not able to provide the space and environment that adult chimpanzees need to flourish. For instance, they were kept in separate, side-by-side cages inside their owners’ home. Even though they could see each other, Casey and Murray weren’t able to tickle, play, and hug each other.

So in October 2010 Casey and her companion were moved to the Center for Great Apes. Upon their arrival, our staff opened the doors in all six bedrooms of the nighthouse and watched in awe as Casey and Murray embraced for the first time since they were youngsters. For over an hour that first day they hugged, groomed, chased, tickled, laughed, and eventually, completely worn out, collapsed next to each other to nap.

They not only remained very close for the next six years at our sanctuary, but Casey also formed a strong bond with Katie, one of the members of her social group (which also included Mickey and Daisy). Casey’s friendship with Katie, in particular, touched us all. Katie had lived alone for 18 years in a small cage in New Jersey. When she arrived at the sanctuary, Katie was afraid of the other chimpanzees. But as soon as we introduced Casey to Katie, Casey gave Katie a warm hug, and Katie’s fear melted. Casey made a point of staying very close to Katie those first few months. As a result of Casey’s patience and kindness to Katie, these two sweet girls became best friends. They frequently sat together, just holding hands, out in the aerial trailways.

Casey was social with humans, too. Among her distinctive traits was her “greeting face.” Whenever she saw her favorite people, she closed her eyes in a tight squint and gave a huge toothy grin. At first, we thought she had difficulty with her eyesight, but we eventually realized that she squinted only when greeting special friends!

We will enjoy our memories of Casey’s other “favorites”—such as her favorite treats (oranges, strawberries, potatoes, tomatoes) and her favorite pastimes (reading magazines and being groomed by either Murray or her caregivers).

Shortly after Casey passed away, we gave Murray and Katie special private time to say their goodbyes. When they came into the room where her body lay, they hugged each other. Then they sat very close together and touched her gently. We were moved to tears when Murray put his arm around Katie and patted her on her back, comforting her.

People tell us that they envy the relationships that our caregivers have with their charges. It truly is a wonderful privilege. Yet it takes courage to face losing our dear friends. Casey, one of those dear friends, touched our lives in a unique way, as each of these precious apes do. She will always be in our hearts, and we will miss her sweet nature and adorable “squinty-eyed” smile. 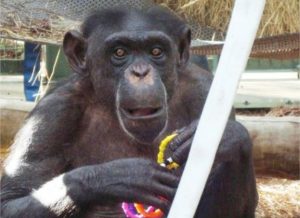 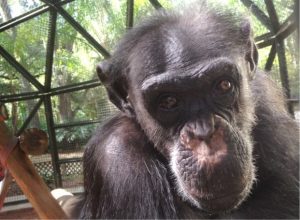 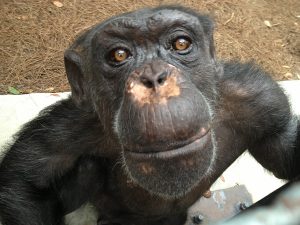