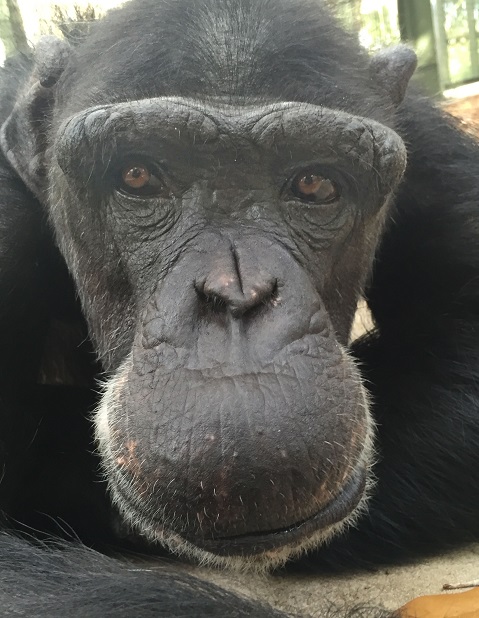 Butch was captured as an infant in Africa in 1972 and was shipped to a dealer in New York. He was then sold to an animal trainer and spent more than a decade performing in the Ringling Brothers Circus in a group of four chimpanzees. When the circus trainer died suddenly of a heart attack, Butch was sent by the trainer’s widow to the Coulston biomedical research facility in New Mexico along with the other chimpanzees in the act (including our Chipper). They were there for only a year or two, but their medical records show that they were still sedated with invasive biopsies performed on them for biomedical research. Luckily, several animal welfare organizations secured their release from the biomedical lab in 1985, and they were then sent to a small roadside zoo in north Florida for unwanted circus animals. Butch and Chipper spent 13 years there until wildlife authorities shut down the facility.

Chimpanzees in circus acts are often forced to do tricks that are unnatural to them (Butch drove a motorcycle in the circus). In the days when Butch worked in the circus, the methods used to make these very strong primates perform were sometimes abusive and hurtful. Most of Butch’s teeth were pulled to keep him from biting. Jane Goodall and Dale Peterson wrote about entertainment chimpanzees (Visions of Caliban), and details about Butch and Chipper’s treatment in the circus are mentioned on page 55.

These two castrated males arrived at their permanent home at the Center for Great Apes in October 2000. For years after Butch arrived at the sanctuary, he still had “ghosts”. No matter what he was doing, he would frequently look back over his shoulder to see if someone was coming up behind him… even when no one was there. Today, we are happy to say that Butch’s “ghosts” and memories of his sad past appear to be gone. He is no longer frightened of things behind him and overall seems to be a relaxed and peaceful elder chimpanzee.

In November 2005, another older wild-caught chimpanzee arrived at the Center. Marco, about 10-12 years older than Butch, had been kept alone in a backyard cage for over 30 years after his circus-performing days were over. Marco had not seen another chimpanzee for 35 years but was introduced to Butch a few months after he arrived at the sanctuary. For the first two weeks, Butch and Marco kept their distance from each other, but suddenly one day… surprised by some visiting neighbors, they ran into each other’s arms and hugged and began intensely grooming each other. They have been fast friends ever since that day.

Butch is on a very specialized diet to mediate IBS-like symptoms, and his favorite foods are cooked rice, chickpeas, quinoa, and corn on the cob.

At the end of the day, he always says goodnight to his caregiver when they turn out
the light.

Butch was born sometime in 1972 in Africa 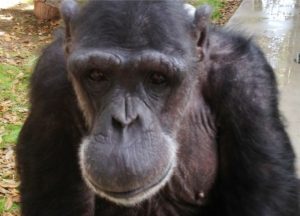 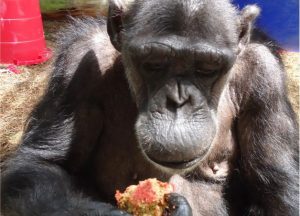 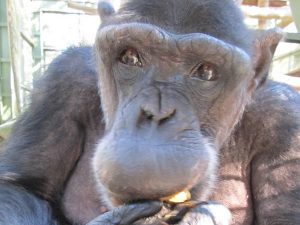