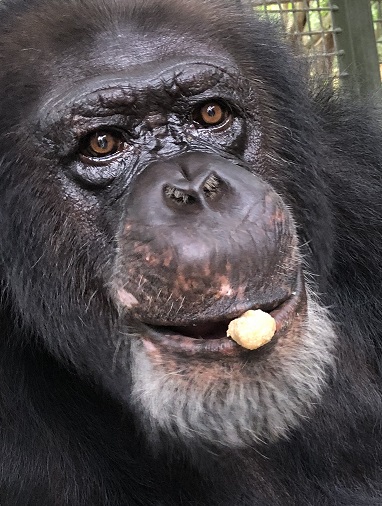 Bo is believed to be in his late 30’s or about 40.  He was in the entertainment business in California where he sired at least one infant and likely more.   From there, Bo was sent to a Missouri breeding facility before being moved on again and finally ending up in Oklahoma at the CW Exotics facility featured in the Netflix series Tiger King.  There, he lived with a female chimpanzee until she died suddenly.  After her death, he lived alone in a small cage across from another single male, Joe, who had also lost his female companion years earlier.

In 2018, the owner of CW Exotics called to ask the Center for Great Apes to accept these two older males, so we immediately drove to Oklahoma to pick up Bo and Joe to move them to our Florida sanctuary.

Even though these two males never were together before, they were introduced to each other as soon as they arrived at the sanctuary and have been best friends ever since. However, they both do really love females, so have also been introduced to Angel and Maggie.  Bo immediately fell in love with Angel!

Bo has a unique high-pitched pant-hoot and he is such a ham! He can be rather jealous and prefers being the center of attention. He loves people and being around his caregivers.

His favorite foods are…pretty much anything!

Interesting note:    After their arrival, we discovered that Bentley (who was sent to our sanctuary in February of 2018 along with two other former entertainment chimps) is actually the grandson both of Bo and Joe! 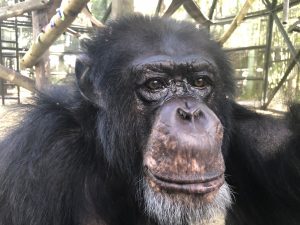 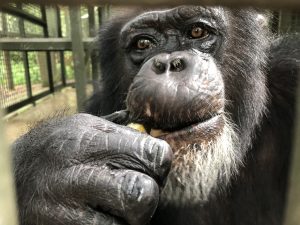 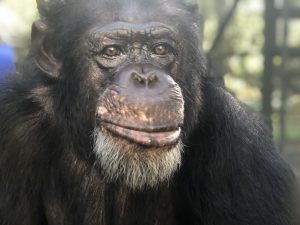