Our vision is to one day see all captive great apes live in a community of care and compassion without the threat of exploitation, experimentation, abuse, or neglect …until there is no need for sanctuary rescue.

The Center for Great Apes’ mission is to provide a permanent sanctuary for orangutans and chimpanzees who have been rescued or retired from the entertainment industry, from research, from the exotic pet trade, or from other situations where great apes need rescue and lifetime care. The Center will provide care with dignity in a safe, healthy, and enriching environment for all sanctuary residents. 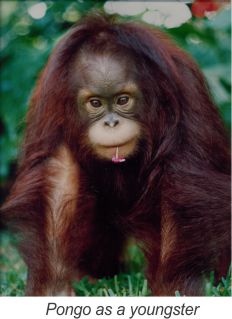 The Center for Great Apes has its beginning roots in the rain forests of Indonesian Borneo, where over 31 years ago, in 1984, founder Patti Ragan spent several months volunteering on a rehabilitation project for wild orangutans. During this intense time of living with orangutans and gaining experience caring for orphaned infants, Patti learned to love and appreciate the quiet and gentle nature of orangutans.

Because of her experience with orangutans in Borneo, Patti was asked in 1990 to help care for a four-week old infant orangutan who was held at a tourist attraction in Miami. Believing that the infant was going to eventually be sent to live with other orangutans at an AZA accredited zoo, she was surprised to learn that the owner intended to sell the baby orangutan to a circus trainer. However, because of a serious illness that affected the infant, he was not sold and the owner agreed to allow Patti the opportunity to find an appropriate home for the infant.

She soon learned that accredited zoos did not want a mixed Bornean/Sumatran orangutan, especially one that was hand-raised.  Realizing that there were no opportunities for placement in an accredited zoo, and that there would never be a chance for him to live in the wild, Patti set out to find a sanctuary for the orangutan infant. However, at that time, there were no sanctuaries in the United States that had orangutans or experience caring for them.

While still volunteering to care for the infant orangutan, the Miami tourist attraction owner asked Patti to also give foster care to a three-month-old baby chimpanzee for a few months.  She learned that that infant chimpanzee was to be sold to another tourist attraction in Orlando. So, she decided to start a sanctuary for not only orangutans, but for chimpanzees also.

After formally establishing a nonprofit organization in 1993, it took four more years to find the perfect location for a sanctuary site that was both affordable and would meet the needs of the apes. She found that place in Wauchula, a small rural community in southern central Florida. Starting with 15 acres of beautiful and tropical wooded habitat surrounded by orange groves and away from development, the sanctuary has now grown to over 100 acres.

Those first two infants Patti cared for became the first great ape residents of the sanctuary. Pongo, the infant orangutan, is now a magnificent adult male in his 20s and weighs over 270 pounds. Grub, the infant chimpanzee, became the dominant and powerful leader of his group of chimpanzees and one of the most loved chimpanzees at the sanctuary. Sadly, Grub passed away from a terminal illness in 2011 when he was just 20 years old.